NAV CANADA and Avitech continue a long history of success and mutual trust.

Avitech feels highly complimented by the receipt of the NAV CANADA “Supplier Recognition Award of Excellence” in which Avitech has distinguished itself from among 32 other companies. The Supplier Recognition Award of Excellence 2017 is an honorable recognition of Avitech’s dedicated support to NAV CANADA for the past 20 years, during which both parties have benefited mutually in the MHS and AIS domain.

NAV CANADA’s first Avitech Message Handling System (MHS) was delivered back in 1998 and the firm’s systems have been maintained, up-to-date and in operational use since then. Under the scope of a multi-year support and maintenance contract, NAV CANADA benefits from Avitech’s state of the art technology and hotline support for Aeronautical Messaging (MHS) and Information Systems (AIS).

The installation of the Disaster Recovery System in Ottawa in 2006, the deployment of the new AMHS switch in Montreal in 2011, together with the upgrde of the NOTAM Management System in 2013, were crucial milestones. Later in 2017, Avitech successfully upgraded the two NAV CANADA systems (MHS and AIS) to the latest SW releases.This last step will also enable NAV CANADA to carry out the expected transition towards AMHS operations in 2018.

During the award celebration, NAV CANADA staff expressed their full satisfaction with the services and systems provided by Avitech. The decision for the recipient of the award was actually made prior to the emergency switchover of the Disaster Recovery System (DRS) which took place in July and had no impact on the assessment. The support Avitech provided to NAV CANADA to bring the DRS into operational use and for switch back to OPS was seen as outstanding.

Avitech GmbH remains a dependable partner to NAV CANADA, supporting its leadership in the ICAO NAMCAR Region by providing human, technical and operational cooperation and support as well as innovative, efficient, reliable and secure solutions. 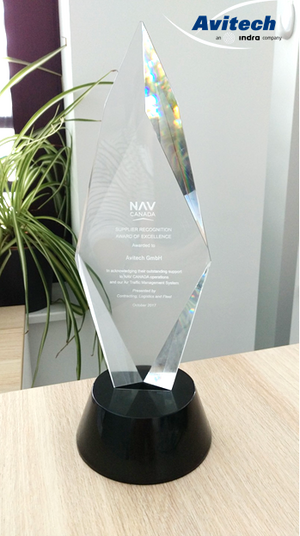